The Less You Know, The Better The Elevator Pitch

Yesterday I participated as a panel judge in reviewing the 2 minute elevator pitches / door openers of a 35 member presales team. The panel was the VP of Sales, VP and Director of Marketing, and me. The scenario was that you suddenly get two minutes alone (anywhere – cafeteria, lobby, elevator) with a relatively senior executive of a company that you have been working with. How do you make that executive curious enough about what you are doing, or what you have learnt, in just two minutes? Curious enough that they will grant you more time or another meeting?


The exercise is useful because it teaches you to condense your thoughts into less than two minutes and get a high level summary that may provoke or challenge the executive. This actual situation doesn’t happen as often as marketers  or sales trainers would believe, but it certainly does happen. (I once got 60 seconds with Bill Gates in an elevator!)


What was interesting is that there were two classes of people who excelled in this situation. The first type was exactly what you expect – the seasoned SE who is used to rapidly translating technology into key business issues and then clearly communicate. The second type – was the people in the audience who knew the least about the technology! Really! The sales operations staff and two new hires gave an awesome pitch. Why? Because they didn’t commit any of these “elevator” crimes.


So let’s be positive instead. Next time you are asked to give an elevator pitch – give it the shaft. No executive wants to hear who you are and what you do – they want to know how you can help them and maybe learn something new. So, instead


1.       Bottom Line Up Front after the basic pleasantries.


Is that a lot for two minutes? No. When you plan ahead you may even have 30 seconds left over. Give it a try.
Posted by John at 3:08 AM 2 comments:

A Critique Of A Fidelity Investments Webcast 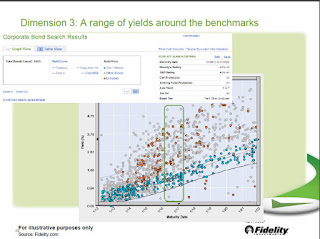 This morning I sat through a 60 minute webcast, sponsored by Fidelity Investments, titled “Fidelity Bond Investing Beyond Yield: A Deeper Dive Webinar!”

The webcast was driven by two Fidelity Vice presidents – Richard Carter and Jay Schwartzberg - and was essentially a demo of how to use their Bond Investing Tool, with some interesting market commentary thrown in.


Here’s the bottom line – Richard and Jay are obviously two very well-spoken and knowledgeable individuals, who were badly let down by their demo and visuals. I’m picking on them as the “web-demo crimes” they committed are very common and can be easily avoided. In no particular order –


1.       I’ve no idea what Jay & Richard look like as there was no introductory slide that had a photo of them. So I’m left listening to two (admittedly pleasant) voices drifting out of my speakers.


3.       Almost every slide was packed and tough to read. When you use a screen shot it should be clearly visible and use up as much of the slide as possible. Their shots were fuzzy and marooned in the middle of the screen.


4.       The “demo” was a tour of the features of the online tool. It consisted of “and if .. and if.. then …” It was very navigational with lots of talk about click and drop-downs. They would have been better off telling a story around the tool. “Imagine you are Billy The Bond Investor, and you have a problem because you want to create a municipal bond portfolio/ re-invest cash from a maturing bond.” etc.


6.       Each slide had the Fidelity logo , a brand symbol and text splashed over the bottom of it. As well as being annoying (I know it’s Fidelity Investments!!) it interfered with diagrams and text on several slides. Designing around that green swoosh has to be tricky. 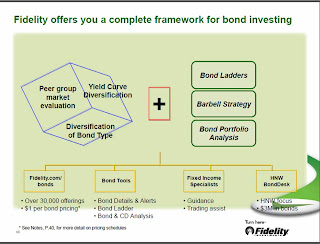 7.       On the positive side, a couple of times when they really drilled down on a screen, they “exploded” just a part of a screen to provide context – of course it was fuzzy.


There is text outside the cube, an acronym (HNW), covered text, bullet points and too many points.


9.       I had no idea what their residual message was. Which is three days from now if there is only one thing I remember what would it be? I bet if you asked 100 people watching you would get more than 50 answers.


A classic example of two fine presenters (I bet they would be very engaging face-to-face) getting buried with a poorly designing demo/presentation. Don’t commit these crimes!!

For a more positive list of great things to do in a webcast read this.
Posted by John at 1:58 PM No comments: